A Tale of Three Pixies 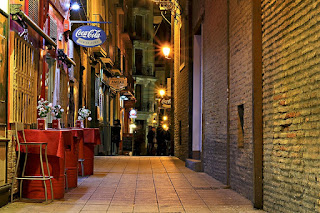 “Well,” Fen said as they stepped out into the foggy night.  “That was… something,” she said.  “And unexpected. I will miss our sister.”

“I will too,” replied Lapis.  “I never would have thought…”

“There’s something wrong,” Petal said.  “With her, I mean.  She’s one of us but there’s a shadow over her.”

“That's because she’s been touched by shadow,” said Saul, stepping out of the pub after them.  He had put his fedora back on and his jacket was pulled tight against the autumn cold.  “The grin from my vision.  It was a goblin’s smile. She was kidnapped by them this spring.”

“Aye.  For their king, I think.  It was a full raiding party.  They took her to a door to the Otherworld, almost all the way to nightmare.  No one was sure why.”  He paused.  “Now I’m a little more sure.  Their king wanted faerie blood.”

“There’s any sort of mischief he could have managed with that,” Fen said darkly. “Especially with her blood mingled with human kind. If the gnomes are bad, the goblins are worse.  The dark children of faerie.  Nightmares.”  She smiled, but there was no humor in it.  “But a fine bloody fight when you can get it. Nothing screams like a goblin when it’s cut. How did she escape?”

“A mage intervened and rescued her,” Saul said.  “One of the locals here. From the college.”

“A son of Hecate helped a faerie?  How… odd.  Usually these days they don’t notice us, and in the old days we were hardly friendly.”

“I don’t think he has any idea what she is.  None of us did.  The bar is a font of faerie power and she just sort of melds with it.”  He shook his head.  “Side effect of the owner’s bloodline, I think.  He and his children are all faerie-blood, and everything here is the work of his hands.  And his wife, too.  She’s another story.  But there’s more than enough power there to conceal her.”  He smiled.  “And most mortals have forgotten the smell of faerie.  When your Queen sealed the way, she did a good job of it.  I’m surprised one got out.”

“Dewdrop was always a special girl.”  Fen looked at the others.  “And things are changing now that Winter draws closer. We need to make sure we have all the power we need before it falls.”  She sighed.  “So. We are indebted to a mage.”

“So it would appear,” Saul said.

“That also appears to be the case,” Saul said, “Especially considering that she doesn’t even know she has faerie-blood.”

“In a city full of gnomes, complete with creepifying fog and a door to nightmare.”

“Three for three.  Why couldn’t you have been this sharp earlier?”

Fen shot him a savage look, and then she sighed.  “All right.  Well. Our course is clear.” She looked at Petal. She looked at Lapis.  “We have a mission,” she continued.  “To protect our kin.  She is part human, so we cannot simply take her with us. We may have to stay for some time while we investigate dangers that beset her and carefully address them. The three of us cannot kill all the gnomes here by ourselves, nor should we… and that doesn’t even begin to address the goblin mystery. So we need time. Lapis?”

The twilight-haired girl looked over at her. “Yes?”

“You have some coin of the realm."

Fen ignored the jibe. "See if  you can find us some lodging, close to here.  Petal, are you refreshed?”

“We’ll need you to build a small well wherever we settle.”

Petal whistled. “That could be chancy.  Things here are… wrong.  The fog is wrong.  The place is wrong.  Reality is damaged and building a well might make it worse.”

“It doesn’t matter.”  Fen took a deep breath, visibly turning ideas over in her mind.  “If we’re going to effect anything, we’ll need power.  And we can’t be constantly running out. Especially with so many things going sideways, and with our need to set up long-term glamour on our guises.”

Petal nodded and pushed her pink-and-blue hair out of her eyes.

“I’ll also need you to contact home.  Let the lady know what we found and why we’re staying.”

“We don’t answer to the queen,” Fen said, cutting her sister off.  “We answer to the lady, and we’re on our own here. We have a job to do.”

“Always eager to serve, oh great bloodhound, even if it’s into a briar patch.”

“One last question for you.”

“Maybe.  That mage who helped Eileen.  Who is he?”

“Oh that’s a fine question, and as anything like that it has no simple answer, but many complex ones. He is a warrior of light tainted by darkness.  A son of Hecate but in his heart more given to Athena.  He fights the shadow yet clutches it to his breast.”

She rolled her eyes.  “No bloody riddles, prophet.  Really.  I just want his name.”